The annual global GDG Summit is held every year before Google I/O. GDG is a community run group for Google technology enthusiasts. You can learn more about the Philly group here. The global summit  is where GDG organizers from all over the world who are attending Google I/O gather and catch up with other organizers. Some of the fun things we did were the sharing table before the summit and a Firebase, lego and Arduino workshop at the summit.


The day before Google I/O, we had a dinner hosted by Women Techmakers which helps women in tech become more visible.

Google I/O is an annual developer conference that celebrates Google technologies. This year, it was held in Shoreline Amphitheater in Mountain View for 3 days.

This was the first time I tried sketch-noting at a conference which is a great way to retain information instead of writing notes.


A lot of the talks and content are already available online on YouTube so I'm going to focus on the things that stood out to me in the keynote and sessions:

Mobile-backend expansion to support notifications, analytics, crash reporting etc all under one roof.

Fun fact I learned in a VR controller session: Do you know why Google Cardboard has no head straps? Because your head moves faster on its own and holding Cardboard up with your hands makes sure you move your head slowly to experience VR better.

Google had some fun after hours concerts featuring Charlie XCX and Kygo on Night 1. They also had Arcades, Concerts and other fun stuff on Night 2. 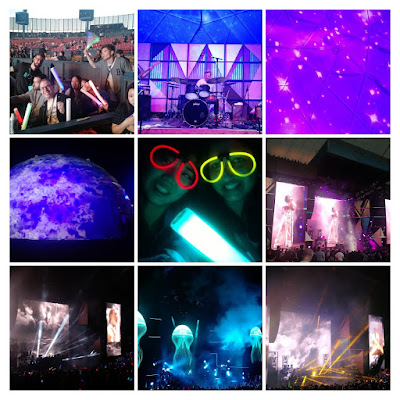 And to end it all, here's something I always look forward to at I/O: Code Labs!

Popular posts from this blog

August 29, 2017
I recently attended and spoke at Android Summit , an Android conference organized by the folks at Capital One. Special shoutout to Jared A Sheehan, Michael Jones and the entire organizing committee for running a fabulous event which raised $6000 for Women who Code. All speakers received a Phillips Hue Starter Kit as a speaker gift which I've used to toggle and dim my living room lights via Amazon Echo. So much fun! I had a prior commitment and could only attend Day 1 but here are my highlights. Process & Workflow A common theme on Day 1 was process and workflow talks which tied in beautifully with Kelly Shuster 's keynote. Kelly is an excellent story teller. In her keynote, she connected a story of communication from her theatre background to how developers, designers and testers need to work together to reduce boiler plate conversations when designing and developing apps. I gave a similar talk earlier this year at  Chicago Roboto  with my co-worker and designer  J
Post a Comment
Read more

January 30, 2018
We're a month into 2018 and I already have a lot going on for the next couple of months. But before things are in full swing, I wanted to take a step back and review the past year. Photo by Miesha Moriniere from Pexels In numbers Wrote 2 blog posts  Won 2 awards  Attended 5 conferences  Spoke at 4 conferences Attended 14 meetups Spoke at 4 meetups Read 12 books  A lot of firsts! Speaking This was the first time I gave 3 completely different talks on different topics like design-developer collaboration, public speaking and leadership, and mastering Android's app resources. It was also the first time I gave a talk with a co-presenter at a conference ( Chicago Roboto - Design Develop Deploy ) Community Organized and helped run the first Android meets iOS meetup at Philly Tech Week. Learning new things This year I immersed myself in Kotlin via Kotlin Koans, Kotlin in Action book and Koltin programming challenges. It took me a while to write my first PR
Post a Comment
Read more

April 22, 2018
Chicago Roboto was back again this year as a single track conference and there were a lot of excellent talks.  Last year I gave a talk with my co-worker and product designer extraordinaire Jess Moon about design and development workflows and this year I was back again but as a Keynote speaker. Keynote Giving a keynote was a stretch goal I set for myself in 2018 and I managed to achieve it early thanks to the Chicago Roboto review committee. The topic I chose was being an Android Advocate who brings teams and communities together. I will be writing a follow up blog post about my keynote process soon but before that, a quick shout out to Corey Latislaw and my coworkers at Warner Bros. Digital Labs who took a look at my first and second drafts and listened to all my half-baked thoughts and ideas. Achievement unlocked 🎉🎉🎉 - Gave my first keynote @chicagoroboto #chicagoroboto Slides with resources available at https://t.co/OJVbZa3Akj — Yash Prabhu (@yashvprabhu)
Post a Comment
Read more