March 28, 2015
My company recently published our Android app on the Amazon app store for Kindle Fire tablets. While getting ready to publish the app on the store, I realized that the list of Kindle Fire specifications that Amazon has here is neither developer nor customer support friendly. 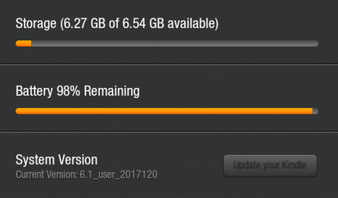 This does not convey the Android OS version at first glance. So, if a user or a customer support representative says that your app is not working on a Kindle and they only give you the system version, you as a developer are not sure which version of Kindle it's failing on.

If you are also debugging via USB on a Kindle device, Android Studio only shows you the Build Model and not the OS version.

To solve these issues, I made the cheat sheet below to help Android developers quickly determine which Android OS version a Kindle is on. Hope this helps!

Popular posts from this blog

March 20, 2016
Recently I joined the fantastic team of developers who run Google Developers Group Philly (GDG Philly), an umbrella organization that includes Android Alliance Philly and GoLang Philly meetup groups. Google Developer Groups or GDGs are community-run groups that are for developers who are interested in learning Google technologies.


The first thing we organized in 2016 was Google Developers Groups Study Jams, a free series of global, community-run, in-person study groups. We ran an Android Study Jam for 5 weeks which used Udacity's Android Beginners curriculum for newbies as well as experienced developers.


Since GDG Philly focuses mostly on Android & GoLang topics, we didn't have to go too far to find facilitators. Three of us organizers - Arpit, Corey & I are Android developers so we split the teaching part into 3 sessions that each of us would lead. The Study Jam ran for 5 weeks with a two week break between Session 4 and Session 5 so that attendees could focus on work…
Post a Comment
Read more

April 22, 2018
Chicago Roboto was back again this year as a single track conference and there were a lot of excellent talks.  Last year I gave a talk with my co-worker and product designer extraordinaire Jess Moon about design and development workflows and this year I was back again but as a Keynote speaker. Keynote Giving a keynote was a stretch goal I set for myself in 2018 and I managed to achieve it early thanks to the Chicago Roboto review committee. The topic I chose was being an Android Advocate who brings teams and communities together. I will be writing a follow up blog post about my keynote process soon but before that, a quick shout out to Corey Latislaw and my coworkers at Warner Bros. Digital Labs who took a look at my first and second drafts and listened to all my half-baked thoughts and ideas. Achievement unlocked 🎉🎉🎉 - Gave my first keynote @chicagoroboto#chicagoroboto Slides with resources available at https://t.co/OJVbZa3Akj — Yash Prabhu (@yashvprabhu) April 12, 2018 The reco…
Post a Comment
Read more

November 19, 2016
Recently I was a panelist on ElaConf's Leadership and Management Panel along with awesome tech bosses Alison Rowland, Caro Griffin and Alisha Miranda. The panel was moderated by Alisha who had crowd-sourced a great list of questions.

The panel was for women interested in pursuing a management career path. Alisha started off the panel with a round of introductions from each of us on our manager-origin story. I moved into the tech team lead role after being an individual contributor (IC) for 3 years. Since two years, I've been leading a team of 4 Android developers.